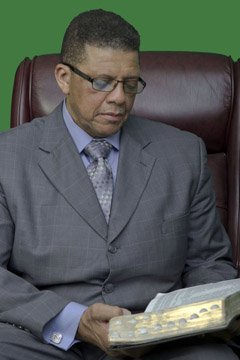 Reverend Leverette began his ministry at the First House of Prayer Church under the leadership of the late Prophet L.K. Johnson where he was immediately appointed as the Superintendent of the Sunday School, a licensed/ordained Deacon, Secretary of the Deacon Board and a Sunday School Teacher. Reverend Leverette was ordained into the gospel ministry in 1994 and received his license in 2003.               .

In 2006, Reverend Leverette was appointed as Pastor of the First House of Prayer Church, and revived the church’s fiscal standing from zero to $650,000 in liquid assets within a 3-year period.

Prior to becoming a Pastor, Reverend Leverette was employed for 25 years in the publishing industry with the Goodheart-Willcox company where he served as Supervisor, Trainer and managed a team of 8 employees. His team helped to increase the company’s production by 47% each fiscal year.

Pastor Leverette started his own church The Greater House of Prayer Church in October 2010. Greater House of Prayer Church received their 501c3 status from the Internal Revenue Service in May of 2013. Pastor Leverette has received awards for excellence in leadership, outstanding community service and started his own record label, Christian Boy Productions in April of 2013. The church’s choir has released their first CD entitled, Miracle in August of 2015 and performs monthly as the featured artist for the Kirk Franklin Sunday Gospel Brunch at the House of Blues – Chicago.

Pastor Leverette is currently a member of the historic First Church of Deliverance under the leadership of Interim Pastor Jerome Chambers and Pastor Emeritus, Bishop Otto T. Houston. Pastor Leverette is an active Pastor of the Metropolitan Spiritual Churches of Christ International, Inc., Chicago Area Gospel Announcers Guild, the Chicago Metropolitan Chapter of the Gospel Music Workshop of America.

Pastor Leverette is a husband and father of 4 children. His wife (Evangelist Deborah Leverette) serves voluntarily as the Chief Operating Officer for the Greater House of Prayer and is a member and lead soloist of the Cosmopolitan Church of Prayer founded by the late Dr. Charles G. Hayes. Two of their children are college graduates and are pursuing careers in the field of Business.

GHOP – All Services are Virtual

30 Days to Slow the Coronavirus Spread